Post number 100, where in Bopfish finds a Picasso at the thrift store (Status: No joke)

A couple of weeks ago I stopped by the Volunteers of America on Indianola.  I spent a while debating the purchase of an Overman pod style sofa but decided against it because of the extensive rust on the legs and a couple of tears in the vinyl upholstery.    I took a quick peruse around the store and spotted the top of this sticking out from behind the usual framed posters of puppy dogs, motivational sayings and bible verses. 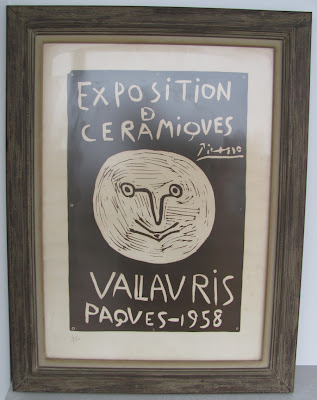 At first I assumed it was just a poster or a decent commercial print from a Picasso exhibition, then I saw this in the lower right corner. 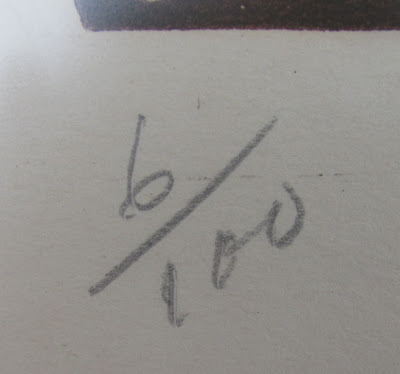 I used to work at a museum and I have also taken some print making courses so finding that this appeared to be a numbered edition got my attention.  Hmmmm, nice frame, too.  I flipped the print over and examined the back where I found a sticker from the framer and could see that the backing paper was quite old.  Yup, I also gave it the "sniff test" and found that is smelled old, as well (We record collectors use this "test" all the time). 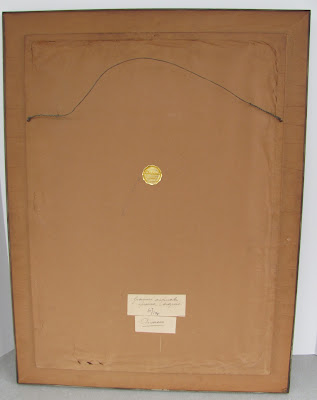 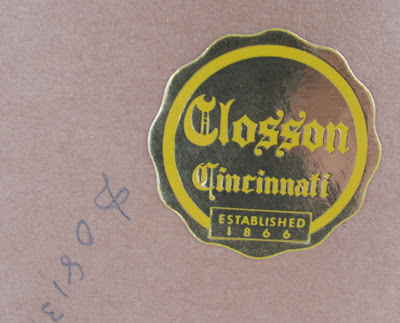 There was also this note glued to the back, which I cannot read because I don't remember enough of my Freshman year of High School French.  These four words could answer quite a bit about the history of this print (might be Picasso's autograph, too). 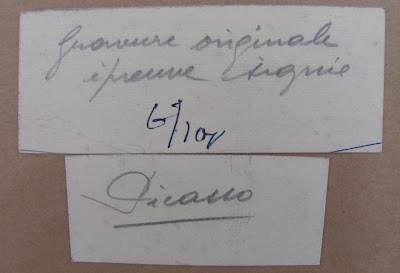 When I got home, I hopped on the ol' interwebz and Google searched "Exposition D Ceramiques".  I quickly found that this was a linocut poster that Pablo Picasso has made for an Easter exhibition of his ceramics in the village of Vallauris.  He had made 100 signed and numbered copies of the poster in brown ink, the edition numbers are in graphite pencil on the left with his signature appearing on the lower right in red pencil.  I had to use a magnifying glass to find the signature because it was rather faint (I pumped it up in photoshop for the top picture).  It matched the signature on one of the prints I found on line.  You could have knocked me over with a feather... I was shaking. 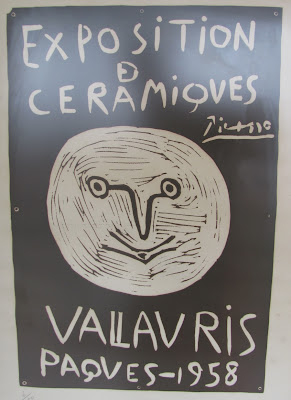 HOLY CRAP,  I GOTS ME A PICASSO!
I'm not going to get rich off of this (dammit) it could sell, at auction, for between $3000 and $4000 because of its very good condition and the very low number in the edition of 100.  Actually, it is quite possible, that this would be one of Picasso's "artist proofs"; it seems that the first 25 were proofed by Picasso and were then gifted by him to friends and favored people.  If there was evidence that this was an artist proof then the value could increase by 25-50%.
How did this end up at a Volunteers of America?  Who knows, but I suspect that it was cleared out of the house of a deceased person and who ever did the clearing just saw it as an old brown poster in a frame and they did not see the signature, the actual signature is quite faint and kind-a looks like some random red marks.
Good Antiques Roadshow story, huh?

I will never call Pablo Picasso an asshole.
Posted by bopfish at 6:32 PM

Add comment
Load more...
Newer Post Older Post Home
Subscribe to: Post Comments (Atom)
INTERESTED IN SOMETHING ON THE BLOG?
Much of it will be found at
booth C008 (on the southern most aisle) at the HERITAGE SQUARE ANTIQUE MALL (Brice Rd. and Livingston Ave. Just one mile north of I-70 at the Brice Rd exit) on the east side of Columbus Ohio.
or drop me an email
bopfishvintage@hotmail.com